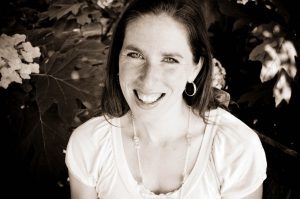 Can you comment on the primary catalysts behind your book and your decision to take a deep dive into the subject of honesty?

I wrote Would I Lie to You? The Amazing Power of Being Honest in a World That Lies 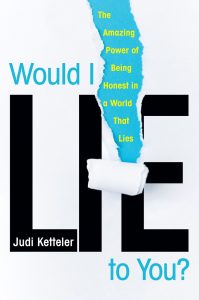 because I was starting to feel powerless in a world of lies. At the same time, I was having a slow realization that perhaps I was part of the problem—that I wasn’t always being as honest as I could be. Where I saw this most was in my marriage and in my relationship with my kids. But once I started paying attention to honesty in every area of my life, I saw that I had been living on autopilot for a while—“hoping” I was an honest person and valuing honesty greatly, but not truly focusing on it or forcing myself to ask the hard questions. The election of Donald Trump certainly brought much of this to the forefront, but it wasn’t all about the political situation. Things were happening in my personal life, too. It all seemed to come to a head around the same time, which is when I started keeping my honesty journal. That simple action—just writing down my choices about honesty—helped me start to see my own patterns around honesty and lying. If I was struggling with honesty and lying, I figured lots of other people were, too. I wrote the book as a way to work through my own relationship with honesty, using my personal experience as a lens to explore a concept that really needed to be explored in the world today.

What was the most surprising thing you learned about honesty in writing the book?

Some of the most intriguing research is in the area of pro-social lying. We hold fast to the idea that deception is always bad, but there is a body of brilliant research trying to complicate that idea. Intuitively, we know not all deception is bad, but we still talk about it as bad, which makes us not really want to engage with it. But you learn so much about yourself by noticing the reasons why you tell lies of kindness, like whether they are driven by empathy, or fear of standing in an uncomfortable space, or even compassion. There is a lot of interesting work being done around the idea of how our institutions could talk differently about honesty and deception—how doctors talk to patients or how managers talk to workers under them, for example..

I also came to learn that noticing your honesty is a practice, similar to mindful breathing. You have to give energy to it and stay focused on it. We think it should just be this natural thing that decent human beings are able to do. Be honest! But in fact, it IS work, because the modern world and our lives are so distracting and full of opportunities to speak and share while only barely noticing what we’re saying. It’s easier to live with only a half-awareness. I learned that every time I find myself judging someone else for being deceptive, I should take a beat. I’m not saying I ignore their deception. We absolutely have to call people out and protest and vote and arrest and do all of those civic and legal things. But we need to turn that mirror inward, too. That’s a piece of the puzzle that it’s too easy to forget, especially as there are more opportunities to spot others’ deception.

Similarly, can you identify one or two things you learned about the process of writing and publishing? Any significant surprises?

Would I Lie to You? isn’t my first book—I have two others about sewing—so I was familiar with the general process of writing and selling a proposal, and then working with an editor through the stages of a manuscript. There weren’t many surprises from that standpoint. But I did learn something key about myself.

I loved writing my first book in 2010, Sew Retro, because it was this weird little idea to write about the history of women and sewing and then to match each decade with vintage-inspired projects. It grew from my interest in the history of the domestic, especially in nineteenth century and early twentieth century America. I knew the important role that sewing had played in women’s lives, but I also understood how it pigeonholed them. I was super passionate about the project and even though the advance was small and it was a ton of work, I LOVED it. I was inspired and motivated to work on it. I actually wound up making good money in royalties and special sales from it, so it worked out.

My second book was a brand collaboration with Spoonflower (a site that lets you design and print your own fabric). I worked with wonderful people, but I just wasn’t passionate about it. It felt like drudgery trying to get through that project. It was a two-book deal, but I backed out of the second book. The “official” deal was between the brand and the publisher, so my not being involved didn’t hinder anything—they found someone else who was passionate about the project.

So I knew that if I was going to write another book, it had to be something I was passionate about. Something that felt right in that place where things either feel right or “meh.” Working on Would I Lie to You? reiterated how much I love writing books, when it’s the right book. With this book, I definitely found my passion—and it was a reminder that for a book-length project to work for me, it’s got to be something I really, really care about.

Can you describe your writing routine, if you have one? For instance, do you write at a set time/place each day? Have to listen to certain music?

I have a beautiful home office that we added on a few years ago (I had a home office upstairs before that, but it was dark and cramped; it’s now my son’s bedroom, which is perfect for him). I love this office. Like I love it. Every day, its colorfulness and Judi-ness makes me happy. There is a cozy couch where I sit working most mornings. The hours just after the kids have left for school and the coffee has kicked in tend to be my sweet spot, between about 8:00 am and 11:00 am. Then I either go for a run or go to yoga. I’m back to my desk around 1:00 or 1:30 and I usually fiddle around with administrative stuff or scheduling things or doing interviews for stories I’m working on, and then the kids (they are 9 and 11) come home from school around 3:30. Even though I lock my door and my husband is the one “officially” responsible for them (he’s been a stay-at-home-dad since our oldest was born), they are loud and distracting. Once they are settled and my husband is cooking, I often have a really productive hour between 5:30 and 6:30. I never listen to music or podcasts or anything while working. It’s too distracting. I like silence and solitude—which is ironic because my house is full of people and quiet is hard to come by!

For your next book, what subject(s) would you want to tackle? Or, if you’re thinking along the lines of fiction, can you give a hint as to what you might be up to?

I want to write a book about intuition next. I wrote an essay about how I felt like midlife hacked my intuition for The New York Times and I had more people email me about that piece than anything I’ve ever written. People shared incredible stories about how intuition had guided them during key times in their lives. One person told me how he was working on the 84th floor of the South Tower on September 11, and his intuition told him to run toward the stairs and leave when the first plane hit the North Tower. Many of his coworkers did not follow and were lost. Intuition is so powerful. Yet it can also lead us astray—or at least that’s been my experience. I want to write about why it works and why it doesn’t work. I also have a middle-grade novel set in the 1980s that’s complete and my agent has been trying to sell. We’ve come close, but it hasn’t happened yet. I’m still hopeful!

What’s currently on your nightstand or TBR?

I’m in the middle of reading the novel Such a Fun Age by Kiley Reid. It’s making me think a lot about privilege, and I’m also enjoying her wonderful storytelling. I’ve heard the novel American Dirt by Jeanine Cummins is great, so hope to read when it comes out.

For non-fiction, I’m about to start The Reality Bubble: Blind Spots, Hidden Truths, and the Dangerous Illusions that Shape Our World, by Ziya Tong. I also just ordered The Character Gap: How Good Are We? by philosopher Christian B. Miller, which looks fascinating (and I wish I had interviewed him for my book!). And I definitely want to read Trailblazer: A Pioneering Journalist’s Fight to Make the Media Look More Like America, by Dorothy Butler Gilliam, after hearing what a great talking she gave at the regional ASJA conference in Washington, D.C. All of the “best books of 2019” and “most anticipated books of 2020” lists just came out, so there are many more on my radar!

If you could have dinner (or form a writing group) with three or four people—living or dead, famous or not, writers or not—who might you choose?

I have to go with forming a writing group! First, Curtis Sittenfeld, because I have a major crush on her and love every novel and short story she’s written. She’s from my hometown (Cincinnati) and I like to claim her as my own. Second, Virginia Woolf, because she was probably the most influential writer to me in college, and made me want to be an English major. And then I would want Toni Morrison and Harriet Beecher Stowe. Harriet Beecher Stowe wrote the bestselling American novel of the nineteenth century (Uncle Tom’s Cabin). It really was a masterpiece of storytelling, and accomplished a specific antislavery agenda. It was also extremely racist. I would love to witness a conversation between Toni Morrison and Harriet Beecher Stowe. I think Toni Morrison—who used a scene reminiscent of Uncle Tom’s Cabin in Beloved—would know exactly what to say to Stowe to open her eyes to the danger and violence of her white privilege. I wish she could have been Stowe’s editor for Uncle Tom’s Cabin. We would have a very different reality right now if the Toni Morrisons of the world were the editors for all the books that were the most influential in American history.

If you could attend any event in the world, what would it be? This can be past, present or future; examples: the moon landing, a case before the Supreme Court; the Olympics; D Day)

This is a little Back to the Future-ish, but I would love to have been there the night my mom and dad first met at this little neighborhood bar in November 1956. I’ve heard the story many times, but I would have loved to have seen the two of them as young people with their whole futures ahead of them. Just to see the look in their eye, and to hear what that first conversation was like.